Play is older then society

Play is older than culture, for culture, however inadequately defined, always presupposes human society, and animals have not waited for man to teach them their playing.[7]

Play is meaningful by itself

(…) play is more than a mere physiological phenomenon or a psychological reflex. I t goes beyond the confines of purely physical or purely biological activity. It is a significant function-that is to say, there is some sense to it. In play there is something “at play” which transcends the immediate needs of life and imparts meaning to the action. All play means something.

Society can be viewed as a play

One might call society a game in the formal sense, if one bears in mind that such a game is the living principle of all civilization.[27]

Play can absorb us

in this intensity, this absorption, this power of maddening, lies the very essence, the primordial quality of play.

We play and know that we play, so we must be more than merely rational beings, for play is irrational.

Play is necessarily for living

for the adult and responsible human being play is a function which he could equally well leave alone. Play is superfluous. The need for it is only urgent to the extent that the enjoyment of it makes it a need. Play can be deferred or suspended at any time. It is never imposed by physical necessity or moral duty. It is never a task. It is done at leisure, during “free time” .
(…)
It adorns life, amplifies it and is to that extent a necessity both for the individual-as a life function-and for society by reason of the meaning it contains, its significance, its expressive value, its spiritual and social associations, in short, as a culture function.

Play happens within a limited time

It can be repeated at any time, whether it be “child’s play” or a game of chess, or at fixed intervals like a mystery. In this faculty of repetition lies one of the most essential qualities of play.

All play moves and has its being within a playground marked off beforehand either materially or ideally, deliberately or as a matter of course.

Play casts a spell over us ; it is “enchanting” , “captivating” . (…) Tension means uncertainty, chanciness ; a striving to decide the issue and so end it.

All play has its rules. They determine what “holds” in the temporary world circumscribed by play. The rules of a game are absolutely binding and allow no doubt. (…) as soon as the rules are transgressed the whole play-world collapses.

The player who trespasses against the rules or ignores them is a “spoil-sport” . The spoil-sport is not the same as the false player,  the cheat; for the latter pretends to be playing the game and, on the face of it, still acknowledges the magic circle. (…) spoil-sport shatters the play-world itself. By withdrawing from the game he reveals the relativity and fragility of the play-world in which he had temporarily shut himself with others. He robs play of its illusion.

In the world of high seriousness, too, the cheat and the hypocrite have always had an easier time of it than the spoil-sports, here called apostates, heretics, innovators, prophets, conscientious objectors, etc. It sometimes happens, however, that the spoil-sports in their turn make a new community with rules of its own. The outlaw, the revolutionary, the cabbalist or member of a secret society, indeed heretics of all kinds are of a highly associative if not sociable disposition, and a certain element of play is prominent in all their doings.

A play-community generally tends to become permanent even after the game is over. Of course, not every game of marbles or every bridge-party leads to the founding of a club. But the feeling of being “apart together” in an exceptional situation, of sharing something important, of mutually withdrawing from the rest of the world and rejecting the usual norms, retains its magic beyond the duration of the individual game.

it loves to surround itself with an air of secrecy. (…) Inside the circle of the game the laws and customs of ordinary life no longer count. We are different and do things differently.

The “differentness” and secrecy of play are most vividly expressed in “dressing up” . (…) The disguised or masked individual “plays” another part, another being. He is another being. The terrors of childhood, open-hearted gaiety, mystic fantasy and sacred awe are all inextricably entangled in this strange business of masks and disguises.

Play is representation and/or contest

Mood of play is unstable

The joy inextricably bound up with playing can turn not only into tension, but into elation. Frivolity and ecstasy are the twin poles between which play moves.
The play-mood is labile in its very nature. At any moment “ordinary life” may reassert its rights either by an impact from without, which interrupts the game, or by an offence against the rules, or else from within, by a collapse of the play spirit, a sobering, a disenchantment.

5 characteristics play must have

Summing up the formal characteristics of play we might call it a free activity standing quite consciously outside “ordinary” life as being “not serious,” but at the same time absorbing the player intensely and utterly. It is an activity connected with no material interest, and no profit can be gained by it. It proceeds within its own proper boundaries of time and space according to fixed rules and in an orderly manner. It promotes the formation of social groupings which tend to surround themselves with secrecy and to stress their difference from the common world by disguise or other means.[5]

6 characteristics play must have

Caillois disputed Huizinga’s emphasis on competition in play. He also noted the considerable difficulty in arriving at a comprehensive definition of play, concluding that play is best described by six core characteristics:

based on course of Kevin Werbach 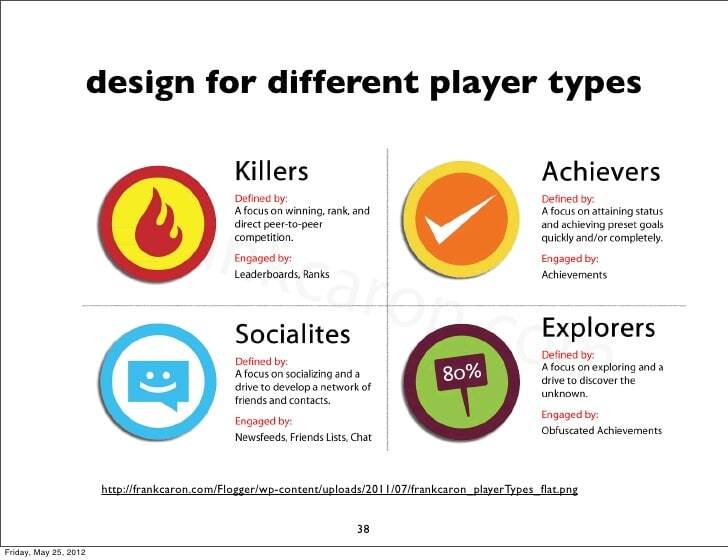 Gamification as a human-focus design from Yu-kai Chou 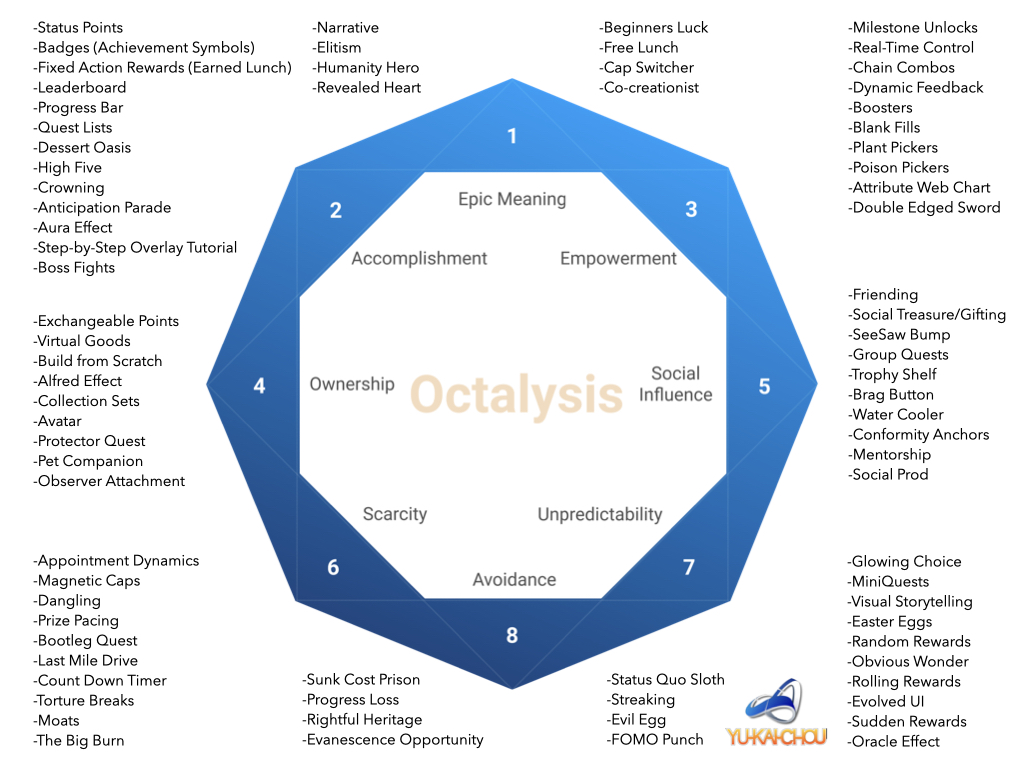